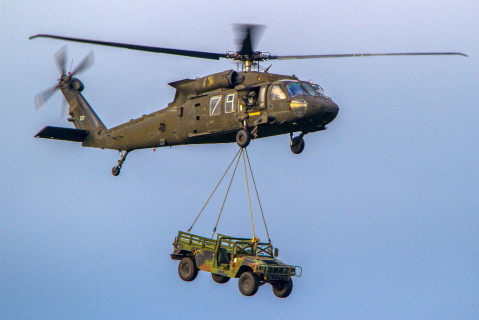 The services have looked at this capability since as early as 2004, when the Navy awarded a Phase I Small Business Innovation Research (SBIR) contract for the development and demonstration of a UAV that could be delivered from the Lockheed P-3 Orion anti-submarine and surveillance aircraft’s sonobuoy launch tubes. Since that time, the Air Force Research Laboratory’s Tactical Off Board Sensors (TOBS) program has also continued development work .

The Army has chosen Area I and its ALTIUS platform to drive progress on its tube-launched, unmanned system. Area I began development of its platform with a 2011 Air Force SBIR contract for its TOBS program. Dr. Nicholas Alley, CEO of Area I, describes the ALTIUS, not as a drone in the conventional sense, but more akin to a “flying sensor.” The drone is autonomous from the moment of launch and only requires a sensor operator to direct its lens.

After launch, the ALTIUS’s wings unfold, which allows the craft to loiter over the mission area. According to past contract specifications reported by Jane’s, a TOBS platform must provide equal or greater sensor capabilities than the mothership it was launched from. The UAV’s endurance requirements, which remain classified, prevented Raytheon’s Coyote from continuing fielding past range and combat environment testing by the Air Force, according to officials.

Area I’s ALTIUS, Alley said, has been able to meet or exceed these requirements. Though Alley didn’t comment on specific requirements or systems, earlier SBIR documentation for ALTIUS cited a, “state-of-the-art, high-energy-density power system that is robust to harsh environmental conditions, does not pose explosive hazards, and is storable for over six months,” as a source of this endurance, as well as a carbon fiber airframe.

It’s still unclear what that capability and others will be used for by the Army on the battlefield. The Air Force’s plans for TOBS include the deployment of drones from gunships in the event of weather which makes traditional sensors untenable. In a discussion with National Defense, Air Force Special Operations Command’s Lt. Gen. Brad Webb said the TOBS would, “[Slide] below the cloud deck giving the asset its first opportunity to view the team on the ground” in the event sensors otherwise couldn’t be used. However, the Army’s helicopters, including the AH-64 Apache which also fills a close air support role, have sophisticated sensor packages and fly at lower altitudes.