Asking for Answers: Drone Use Increasing on Wildfires 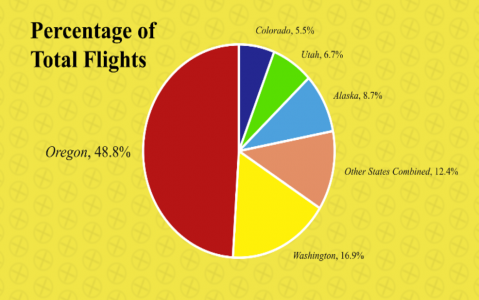 "The amount that we're using those for infrared mapping and real-time imagery of fires especially when you have the smoke settle down in and you can't fly manned aircraft this will give us the ability to get in and look under the smoke and see what the fire's doing in some cases," Eric Hensel, Fire and Aviation Officer with U.S. Forest Service Rogue River-Siskiyou National Forest said.

Unmanned aircraft systems are being used by Forest Service crews, Bureau of Land Management and the Oregon Department of Forestry.

The numbers are quite drastic when looking at the drone use in Oregon compared to other states in the country. Out of nearly 1,500 flights on federal fires in 2018, 715 were in the state of Oregon.

The 2018 Garner Complex saw the most drone flight hours out of any incident, according to the Department of Interior.

"We used them on the Klondike Fire last year, Klondike and Taylor Fires both," Natalie Simrell, Fire Management Officer with Bureau of Land Management said. "They (drones) were a huge asset for us, they were able to carry ping pong machines to burn out, they did fire perimeters and flew infrared for us."

In 2018, the Garner Complex, which included the Klondike and Taylor Creek Fires, featured the most drone hours flown on a single incident nationwide. (Department of Interior)

At the state level, the Oregon Department of Forestry first integrated UAS (Unmanned Aircraft Systems) into the large fire environment in 2017.

According to ODF Public Affairs Specialist Bobbi Doan, in 2018, the number of hours decreased.

The only commercial platform used by the agency in 2018 for large fire support was the Insitu Inc. Scan Eagle on the Garner Complex (night operations).