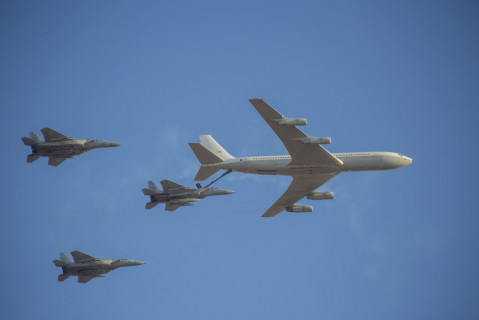 Aerospace giant Boeing could invest billions of dollars in Israel's economy in the next decade after signing a reciprocal spending agreement with the Ministry of Economy, the government announced Tuesday.

Boeing, which is currently competing for a Defense Ministry tender worth an estimated $10 billion over the next decade, has agreed to collaborate with Israeli industry to the value of at least 35% of all government deals exceeding $1 million.

Should Boeing be awarded one of Israel's largest defense tenders to date, with the Defense Ministry seeking to purchase a new fleet of fighter jets, transport helicopters and aerial refueling tankers, the company would invest at least $3.5 billion back into the Israeli economy.

"A reciprocal purchase agreement on such a scale is a significant achievement which will lead to the growth of many companies in the domestic market, and to expand their activities and success in international markets," said Economy Minister Eli Cohen.

"We will continue to insist that foreign companies fulfill their obligation to purchase in return from Israeli industry, which will enable the growth of employment, industry and state revenues."

Boeing currently spends over $220m. annually in Israel on defense and civilian purchases, and by way of investments in Israeli start-ups through its HorizonX venture capital initiative established in April.

"Our years-long partnership with Israel essentially commenced with the establishment of the state," said Leanne Caret, CEO of Boeing Defense, Space & Security. "This agreement ensures that the relationship and partnership will continue to grow and prosper in the coming decades."

The agreement could provide a significant boost for small and medium-sized Israeli defense firms set to lose out from a record $38 billion US military aid package to Israel.

While the memorandum of understanding (MoU) negotiated between then-president Barack Obama and Premier Minister Benjamin Netanyahu in September 2016 will see Israel benefit from the largest military aid package in US history, the Israeli arms industry could lose $1.3b. in annual revenue and 22,000 workers could lose their jobs.

Until now, up to 26% of US military aid, adding up to billions of shekels each year, could be spent inside Israel but the new agreement requires all American military aid to be spent in the US, resulting in losses for local industry.

The agreement came into force on October 2 with the beginning of the 2019 fiscal year.