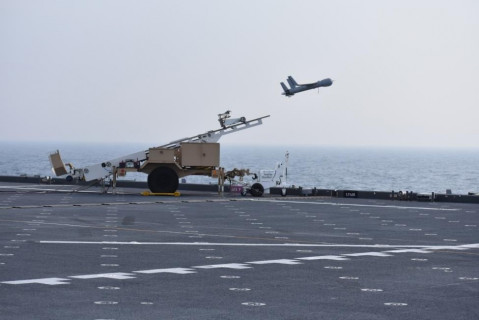 ARLINGTON, Va. — The U.S. Coast Guard is so bullish on the Insitu-built ScanEagle unmanned aerial vehicle (UAV) that it is moving up the schedule of installing it on its Legend-class national security cutters (NSCs).

“Over the past year and a half, we have begun integration on board all national security cutters,” said Ron Tremain, vice president of Insitu Defense, a Boeing company, who spoke to Seapower on Jan. 15 at the Surface Navy Association’s gathering here.

“We had a notional timeline to integrate over a five-year period and [Coast Guard Commandant Adm. Karl Schultz] stated in his speech last year that he wanted to integrate it on board all national security cutters by the end of 2020.”

Insitu installs the UAVs and their launch-and-recovery equipment and ground-control stations on board the ships, he said. Insitu sends four-person teams to deploy with each ship. They operate the entire system once on board. The teams are fully embedded with their ship’s crew.

“The ground-control station is fully integrated into the command-and-control structure of the ship,” Tremain said. “The launch-and-recovery equipment is roll-on/roll-off.”

A standard pack-out for a deployment is three ScanEagle UAVs, he said. The sensor systems include and electro-optical/infrared camera, a laser pointer, a communication relay, an Automatic Identification System interrogator and Vidar (visual detection and ranging, a surface search capability).

Retired Coast Vice Adm. John P. Currier, head of JP Currier Consulting LLC and former head on Coast Guard acquisition, told Seapower that the sensor data product from the ScanEagle is provided to the cutter for analysis and action.

Currier said that before deployment of the ScanEagle the NSC had a scan of 35 miles either side of the ship with its organic sensors.

“With ScanEagle on board, for good parts of the day, you’re up to 75 miles either side of the ship as you’re moving through the sea space,” he said. “ScanEagle is a game-changer.”

“We’ve effectively doubled the search area of a national security cutter,” Tremain said. “We’re he only company flying with Vidar, and we’re surveilling up to 1,000 square miles of open ocean per flight hour, and we’re identifying greater than 90% of the targets.”

Deployments under the current contract have been made by cutters Monroe, James and Stratton. Four were made on Stratton on the 2016 contract.

Tremain said the ScanEagle teams have been credited with assisting in the interception on nearly $3 billion worth of narcotics to date.

The current $118 million ISR services contract is a one-year contract with seven options for one-year extensions. Tremain said that with the expedition of the installations the value of the contract will go up exponentially.

He said that Insitu is integrating ScanEagle on a number of ships of other navies around the world. The Coast Guard also plans to integrate the ScanEagle on the forthcoming Heritage-class offshore patrol cutters.