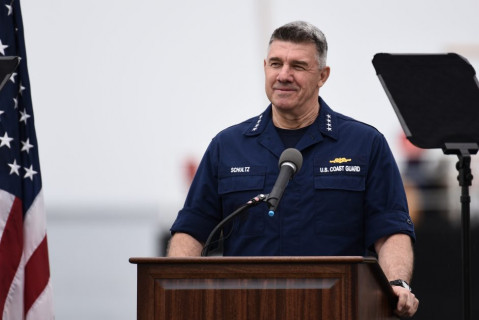 development at the Boeing subsidiary, in an interview on Monday. “What I see happening: not only are we already working with a number of international navies, but I see more international navies patterning their [unmanned aerial system] operations after the Coast Guard.”

ScanEagle drones flown from the USCGC Stratton over the past year and a half have helped in the seizure of an estimated $1.8 billion in cocaine. Coast Guard Commandant Adm. Karl Schultz, in March, announced plans to accelerate the installation of ScanEagle drones on all National Security Cutters and Offshore Patrol Cutters. Insitu — which owns and operates the Coast Guard’s ScanEagles — is installing the gear for controlling the drones on the service’s ships.

The U.S. Navy started using ScanEagles on its destroyers in 2005. Italy, Britain, Colombia, and Greece are among the international navies using the drone.

In recent weeks, the Federal Aviation Administration granted an Operational Certificate of Waiver or Authorization to allow Coast Guard ScanEagles to fly surveillance missions near the U.S.-Mexico border, Tremain said.

“It’s the very first step in normalizing UAS operations,” he said. “Although a very, very small step, it is significant.” Full article: