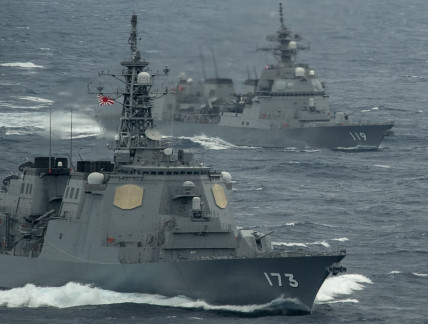 On April 20, 2022, the Japanese Ministry of Defense (MOD) released a document in English titled “Defense Programs and Budget of Japan” outlining the FY2022 defense budget. The defense budget for FY2022, which was approved in March 2022 (in Japan, the new fiscal year begins in April), is organized as a so-called 16-month budget integrated with the FY2021 supplementary budget approved at the end of last year, which is named the “Defense Strengthening Acceleration Package”.

The budget amount is 5,866.1 billion yen (about $51 billion), the largest ever, and if the budget related to the realignment of U.S. forces in Japan is included, the total amount is 6,177.4 billion yen. Within this budget, especially those related to the Japan Maritime Self-Defense Force (JMSDF) are as follows:

Among the modifications to enable operation of F-35B fighter jets with the Izumo DDH, this fiscal year’s budget includes funds for the purchase of JPALS, developed by the U.S. Navy and the Raytheon, as a landing guidance device to be installed on the Izumo, and for enlarging the windows of the air traffic control room on the Kaga, which began its modification in March 2022.

The Japan Air Self-Defense Force (JASDF) has budgeted for the purchase of eight F-35Bs, six in FY2020 and two in FY2021. And the FY2022 budget allowed for the purchase of four F-35Bs. F-35B deliveries to JASDF is expected to begin in FY2024. Nyutabaru Airbase, located in Miyazaki Prefecture, Kyushu, is set to be their initial home base. Six aircraft will be deployed to the base in FY2024, followed by two in FY2025, and eventually one squadron (20 aircraft) will be based there. JASDF plans to deploy a total of 42 F-35Bs.

Currently, JMSDF is aiming to introduce UAVs to reduce the burden on currently operated maritime patrol aircraft such as the P-3C and P-1 in anticipation of future population reductions and other factors. The budget included the cost of testing to confirm its usefulness, but the specific model name of the UAV to be used was not disclosed. However, during the General Atomics’ MQ-9B SeaGuardian demonstration by the Japan Coast Guard (JCG) based at JMSDF Hachinohe Air Base in northern Japan in 2020, JMSDF received data from the JCG on this demonstration, and it is considered a strong candidate for this test operation. Northrop Grumman’s Firebird is also a potential candidate as well.

The JMSDF currently operates manned aircraft such as the SH-60J/K and MCH-101 as shipboard aircraft, but in addition to these, they are considering introducing UAVs that can be operated from ships.

These UAVs will not completely replace manned helicopters, but rather will complement their capabilities. This is because the JMSDF cannot afford to lose its manned helicopters, which are capable of anti-submarine warfare and the transport of supplies and personnel. Therefore, UAVs are expected to supplement helicopter capabilities or perform missions that are difficult for helicopters to carry out, such as offshore surveillance, target search, and observation support for bombardment by destroyers in remote islands defense. Thus, it is likely that a type of UAV that can operate alongside helicopters on destroyers will be tested. For example, Airbus’ VSR700, Schiebel’s CAMCOPTER S-100, Saab’s Skeldar V-200, Insitu’s ScanEagle, etc. can be considered.

The new JMSDF frigate, the Momi class FFM, will be given a minesweeping capability using unmanned surface vehicles (USVs) and unmanned underwater vehicles (UUVs). The current year’s budget includes the cost of acquiring USV. The role of the USV is to run alongside the surface of the ocean on top of the OZZ-5 UUV which developed by Mitsubishi Heavy Industries (MHI), acquire data captured by the OZZ-5’s sonar in real time via sound waves, and transmit this data to the Mogami class via radio communication. These acquired underwater data will be processed on board the Mogami class to confirm the existence of mines. And if mines are found, USVs will carry out minesweeping with Expendable Mine Disposal (EMD) or other devises.

Japan is currently strengthening its defense capabilities in the Southwest Islands, including Okinawa, and will introduce two transport ships to deploy troops and transport ammunition, supplies, and vehicles to such islands. The budget for the introduction of one logistics support vessel (LSV) and one landing craft utility (LCU) was included this time, and a total of four vessels (one LSV and three LCUs) will eventually be in operation. The transport vessels will be operated by a joint unit of the Ground, Maritime, and Air Self-Defense Forces, and this unit is expected to be formed by March 2024.

The MOD is currently in the process of retrofitting the Type 12 SSM to significantly extend its range from 200km to 900km and to reduce the radar cross section (RCS) to improve its stealth performance. Also, the improved Type 12 SSM will be able to attack not only enemy surface ships but also ground targets. In addition, the missiles will be updated with data about their targets via satellite communications during their flight, which will improve the accuracy of their attacks. Modification of this Type 12 SSM began in FY2021, but this is a ground-launched version, and the FY2022 budget includes funding for the development of versions that will be launched from JMSDF destroyers and JASDF fighter jets. The development of the ground-launched version will be completed by FY2026, the ship-launched version by FY2027, and the air-launched version by FY2029.

The Japanese MOD is focusing on developing technologies to respond to future military threats, including railguns that eject artillery shells at high speed. According to the MOD’s description, the railgun is designed to be operated in two ways: on board a JMSDF destroyers to intercept missiles, and on board a truck as a coastal gun to attack enemy naval vessels. The MOD plans to conduct research on this railgun from FY2022 to FY2027, and then test it until FY2029. The research is also being considered for collaboration with other countries for speed and cost reasons. Full article: