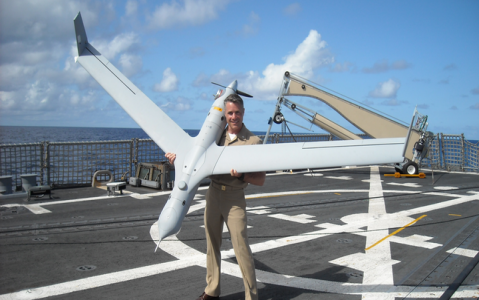 Officials of the Naval Air Systems Command at Patuxent River Naval Air Station, Md., are asking Insitu to provide 12 ScanEagle UAVs for Malaysia; eight for Indonesia; eight for the Philippines; and six for Vietnam.

The ScanEagle UAV is 5.1 feet long with a 5.6-foot wingspan. It weighs as much as 48.5 pounds and can carry a 7.5-pound sensor payload. The UAV can fly for more than 24 hours at altitudes as high as 19.500 feet, and at speeds to 80 knots. The unmanned aircraft can fly on gasoline or heavy fuels like jet fuel, diesel, or kerosene.

The mission of ScanEagle is to provide persistent surveillance and reconnaissance imagery on land or at sea at lower costs than other surveillance methods for military and agriculture missions.

ScanEagle can carry a sensor payload consisting of visible-light camera, medium-wave infrared imager, or both integrated in one turret. The UAV also has an analog digitally encrypted video data link, as well as encrypted or unencrypted command-and-control data link.

On this contract Insitu will do the work in Bingen, Wash., and at several shore and sea locations in Malaysia; the Philippines; Vietnam; and Indonesia, and is expected to be finished by March 2022. For more information contact Insitu online at www.insitu.com, or Naval Air Systems Command at www.navair.navy.mil. Read more: