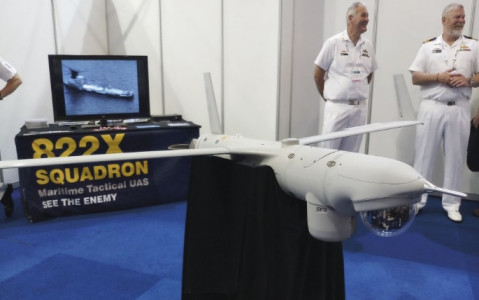 A launcher for the ScanEagle unmanned aerial vehicle (UAV) and its associated Skyhook retrieval system were installed on the ship's flight deck in August, a representative from the RAN's 822X Squadron told Jane's at the Pacific 2019 maritime exhibition in Sydney.

This installation was followed by a series of deck handling and launch trials for the UAS, which have been carried out ahead of HMAS Leeuwin 's deployment to Southeast Asia, said Lieutenant Scott Gidley, an operations officer at 822X Squadron. Leeuwin departed Cairns for this deployment on 1 October.

The ScanEagle on Leeuwin will not be used for hydrographic surveys but will be used to prepare RAN personnel with the necessary skillsets associated with operating such unmanned systems from vessels that are similar in disposition to the hydrographic ship, said Lt Gidley.

The lieutenant pointed to the RAN's incoming pipeline of new vessels, including the Hunter-class frigates and the Arafura-class offshore patrol vessels (OPVs), which are expected to feature similar UAV systems in the future. "The more we can achieve in terms of developing parameters on Leeuwin , the less legwork we will have to do on these future ships," said Lt Gidley.

822X Squadron is an operational formation that was commissioned in October 2018 to conduct on-land and at-sea evaluations of the ScanEagle and the Schiebel S-100 Camcopter UASs.