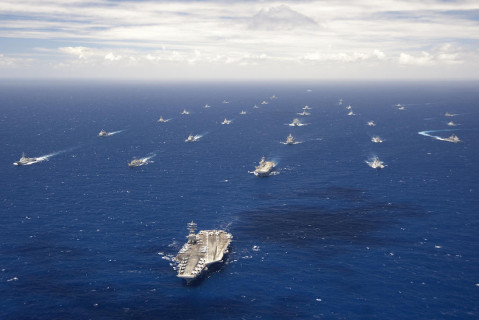 USNI News reports that Acting Secretary of Defense Patrick Shanahan will unveil a new Indo-Pacific Strategy at the Shangri-La Dialogue in Singapore later this month.

Randall Schriver, the Assistant Secretary of Defense for the Indo-Pacific dropped some hints at a round-table with journalists in Kuala Lumpur.  According to USNI News, Schriver noted that the Indo-Pacific has been identified as the priority theater, and that he expected Secretary Shanahan to describe what that means in terms of increased resources.

In response to a question about Freedom of Navigation patrols, Schriver said that China’s militarization of its artificial islands in the South China Sea has changed facts on the ground. “There’s not necessarily an expectation that they roll back,” he said, adding, “It’s our intent to make sure that no one country can change international law on the status of the South China Sea.”

Assistant Secretary Schriver said that a lot of other countries are also conducting such patrols, and cited last month’s transit of the Taiwan Strait by the French frigate Vendemiaire; in response, Beijing angrily disinvited France from the naval parade held to celebrate the 70th anniversary of the founding of China’s Navy.

Schriver also said that the U.S. is providing Pacific partners with expanded maritime surveillance capabilities. That includes ScanEagle drones – the Philippines has already received six of the unmanned aircraft; Malaysia and Indonesia will be next. There is also a possibility to transfer old P-3 Orion maritime surveillance planes as the U.S. Navy transitions to the new P-8 Poseidon.