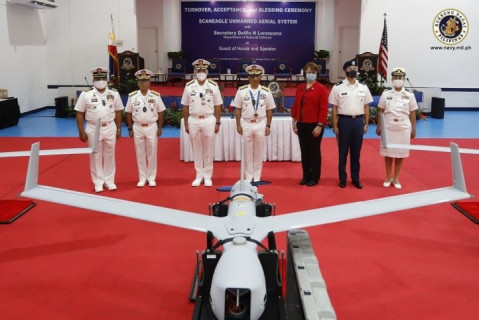 The PN formally received an Insitu Inc ScanEagle 2 UAS from the United States in a ceremony held on 25 November at Naval Base Heracleo Alano. (Philippine Navy )

The PN said in a statement that the PHP710 million (USD14.79 million) system – which comprises eight unmanned aerial vehicles (UAVs), two launchers, the SkyHook recovery system and a ground control station – was handed over by US Acting Deputy Chief of Mission Kimberly Kelly and representatives from the US Embassy in the Philippines’ Joint US Military Assistance Group (JUSMAG).

The system, which was acquired through the US Maritime Security Initiative (MSI) programme following a Philippine request made in 2017, will be operated by the PN’s Maritime Unmanned Aerial Reconnaissance Squadron 71 (MUARS 71), a recently activated squadron under the Philippine Fleet’s Naval Air Wing that will operate the aircraft out of Naval Station Leovigildo Gantioqui in San Antonio, Zambales Province.

The new assets, which will be primarily used for maritime intelligence, surveillance and reconnaissance (ISR) operations, will complement a similar ScanEagle system being operated by the Philippine Air Force’s 300th Air Intelligence and Security Wing at the Antonio Bautista Air Base in Palawan, according to Philippine officials.

The PN pointed out that the ScanEagle UAS, which can be launched from both land and the service’s capital ships, is expected to provide near-real-time coverage of disputed areas in the South China Sea.