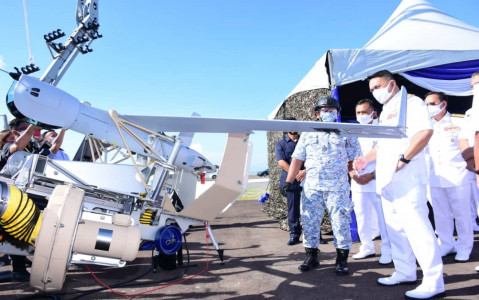 For the record, the RMN took delivery of the first batch of six ScanEagles (along with 2 launchers, 2 skyhooks and 3 Ground Control Stations) in May last year. They were donated by the United States under the Maritime Security Initiative (MSI) programme.

Boeing subsidiary Insitu was awarded a $48 million contract for 34 ScanEagle unmanned air vehicles for Malaysia, Indonesia, Philippines and Vietnam, according to a U.S. Department of Defense contract announcement issued on May 31, 2019. The contract states that 12 UAVs are meant for the RMN. Funded by the United States, the ScanEagles are to be delivered by 2022 for a price of $19,329,334. In addition, this order provides for spare payloads, spare and repair parts, support equipment, tools, training, technical services, and field service representatives.

“The operation of UAS will give an advantage to RMN in terms of Intelligence, Survillance, Reconaissance (ISR) throughout the country’s waters as well as increase the current maritime domain awareness (MDA). A 12-month operational training guided by representatives of the Boeing-Insitu company was started by the 601 Squadron operations crew and the inaugural flight of the ScanEagle aircraft was successfully implemented on 5 February 2021.”

“For over 60 years the U.S. and Malaysia have shared a productive and mutually beneficial security cooperation partnership, and I am glad to see that continuing today. These UAS will enhance the Royal Malaysian Navy’s ability to defend Malaysia’s territorial integrity. An additional 12 ScanEagle systems will be handed over to the Malaysian government later this year.”