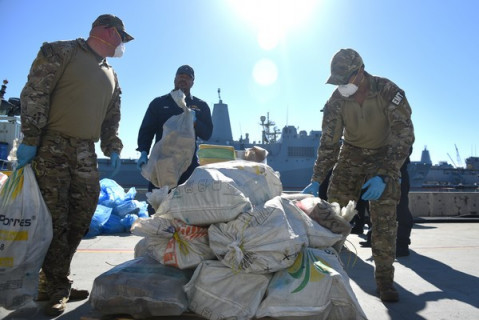 The cocaine was seized in international waters off the coast of Central and South America in support of Operation Carribe.SAN DIEGO — U.S. Coast Guard and Royal Canadian Navy crews offloaded more than 5,100 pounds of seized cocaine Friday, worth nearly $70 million wholesale, in San Diego following a 49-day counterdrug patrol in the Eastern Pacific aboard Her Majesty’s Canadian Ship (HMCS) Edmonton with an embedded U.S. Coast Guard law enforcement detachment.

The crew of the Edmonton with their embedded U.S. Coast Guard law enforcement detachment stopped two go-fast boats, resulting in the seizure of more than 3,500 pounds of cocaine worth almost $50 million. The crews also recovered an additional 1,600 pounds of cocaine from the Eastern Pacific Ocean during the patrol.

"This 'cycle of justice' disrupts a 'cycle of crime,' which left unchecked, fuels violence and instability that corrodes our hemisphere's social and economic fabric," said Vice Adm. Linda Fagan, U.S. Coast Guard Pacific Area commander. "I stand here today, alongside our Royal Canadian Navy partners, resolved in a shared commitment to protect those threatened by criminals and bring to justice those engaging in these nefarious acts.

The Canadian Armed Forces are an international partner in the fight against transnational crime. Canadian-U.S. crews were responsible for seizing more than 31,000 pounds of cocaine from suspected drug smugglers in the Eastern Pacific since 2015 – taking an estimated $417 million out of the hands of the transnational organized crime networks.