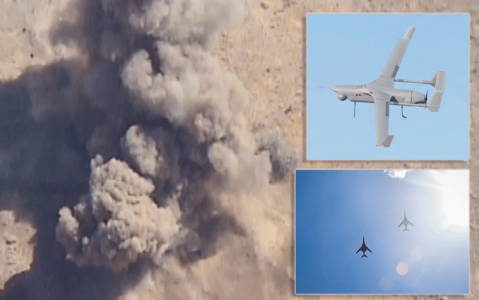 The U.S. Marine Corps, Air Force and Australian Defence Force operated as a combined task force during a exercise “Loobeye” in Northern Territory, Australia, throughout August.

The scenario of the drils focused on a small naval expeditionary force’s ability to rapidly deploy, integrate with foreign partners, coordinate airstrikes and call for close air support on targets within contested environments. The latter were conducted by U.S. Air Force B-1B Lancers with the 37th Expeditionary Bomb Squadron and B-2 Spirit stealth bombers with the 393rd Bomb Squadron deployed to the Indo-Pacific region as part of Pacific Air Force’s Bomber Task Force.

RQ-21A Blackjack is the U.S. Navy and Marine Corps’ Small Tactical Unmanned Aircraft System designed and manufactured by Insitu Inc., a wholly owne subsidiary of Boeing. According to the Boeing datasheet, the RQ-21A Blackjack, is a Group 3 UAV: an unmanned aerial vehicle whose weight is below 1,320 lb (around 600 kg), speed is below 250 knots and normal operating altitude is below 18,000ft.

Endurance of 16+ hours per day (depending on configuration)

“What we provided was target acquisition, forward, in austere environment that allowed the MAGTF Commander to sign off on the strikes, confirm the targets with our FMV (Full Motion Video),” said U.S. Marine Corps 1st Lt. Harrison Zhu, an unmanned aerial system commander with Aviation Combat Element, Marine Rotational Force – Darwin, in an video interview released by the USMC. “So we went out, found the target, sent the video feedback back to the command element for them to identify the target, and approve the strikes. We also acted as a command and control node, so we had a communication with the command element, and we are ready to relay execution checks, and relay information to the USAF bombers.”

“What the RQ-21 brings to the fight is a smaller RCS (Radar Cross Section) with a smaller footprint, that can go forward and operate independent from runways. So we provided a risk-worthy asset in a contested airspace. And then basically, a self supporting aerial reconnaissance asset. Of course it’s the first time RQ-21 has been flown in Australian airspace. […] Additionally RQ-21 is a system that the Australians are looking at so we can we provide them a template and a peek into how we operate it.”

“Integration with the US Air Force was extremely smooth. RQ-21 and VMU’s in general are trained with joint standards. So the language that we spoke with the Air Force was completely the same. We had a video conference ahead of time and we instantly spoke the same language from there and then we got on station, and we’re in the same airspace speaking the same language and actually incredibly smooth. But again, that’s why we trained to the joint standard. And this is exercise Loobeye was a proof that that works. So anytime we go forward, we don’t expect to be in only US controlled areas, of course, so that’s the importance of the Australian Defense Force. I mean, you look at the commandant planning guidance and how we’re looking at force design and trying to be an inside force in within enemy weapon engagement zones, you’re gonna have tons of different assets in their joint services especially the US Air Force, if we’re conducting deep air support, and absolutely other countries if we’re fighting on their soil. So the importance of being able to show up and integrate and effectively bring fires to targets and then intelligence back to headquarters is absolutely critical. This is the first time an unmanned aircraft without the requirement for runway, has been operated in Australia. So that in and of itself is immediately improvement and modernization of our capabilities. That being said we’re testing a whole bunch of new comm pathways. We’re operating satellite communication systems that VMU-3 has not operated before, quite frankly, that the Marine Corps has not operated before organically only with FSR support, and that’s multiple SATCOM systems. So absolutely modernizing to see to that way and then the overall base capability of launching independent of a runway.”

The exercise design was driven by the Marine Corps’ modernization plan, which seeks to make Marines “first on the scene, first to help, first to contain a brewing crisis, and first to fight if required to do so,” according to Commandant of the Marines Corps, Gen. David H. Berger’s planning guidance released in 2019. The plan calls for Marines to operate from forward expeditionary bases as a fast and mobile force in order to conduct a variety of missions that help set conditions for larger naval forces.