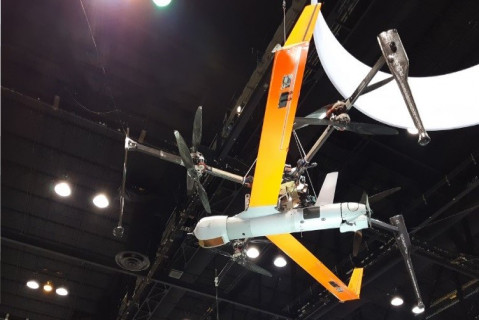 Cory Roeseler, company engineer, told Jane's on 1 May that FLARES uses a wing root gripper, similar to how a falcon or an eagle catches a fish, for example, to attach to the fixed-wing UAV. FLARES then rises off the ground, an operator waits for the fixed-wing UAV to activate its autopilot and have its engine achieve full revolutions per minute (RPM), before an operator commands FLARES to release the fixed-wing UAV and allowing it to take flight.

Roeseler said militaries can benefit from FLARES thanks to its small footprint compared with traditional catapult launchers. FLARES and a fixed-wing UAV share space the size of a pickup truck's bed. This allows a fixed-wing UAV to be deployed in an expeditionary environment or from ships.

Providing a VTOL launch and recovery capability eliminates the weight and drag penalty on a UAV for long endurance missions by eliminating the battery and mechanical weight that rotors carry on fixed-wing aircraft. Roeseler said this enables a customer to use better payloads.

"There are a lot of places where shipping and logistics, you can't fit a lot of equipment, but you want to get top quality surveillance imagery back," Roeseler said at the 2019 AUVSI Xponential conference. "FLARES offers the [soldier] that capability." Read more: